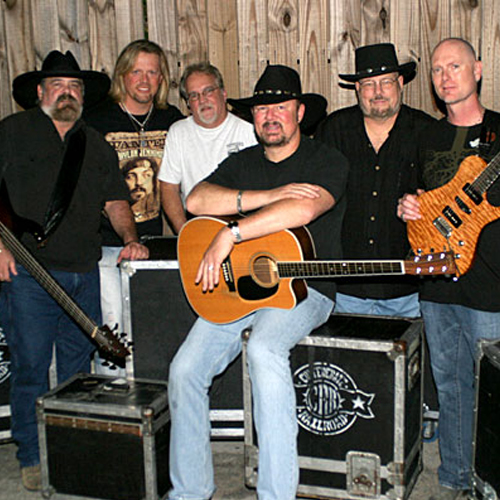 ALL TICKETS INCLUDE PARKING. You are required to present your ticket when you arrive at the parking lot entrance. Doors open at 6 p.m.

Confederate Railroad first rolled onto the national country music scene in the early 90s with its unique style and sound.

Headed by founder and frontman Danny Shirley, the former backup band for both David Allan Coe and Johnny Paycheck got their big break by signing with Atlantic Records. The first single from their debut album ("Confederate Railroad") was "She Took It Like A Man". It went to No. 26, a preview of what was to come. "The next two singles, "Jesus and Mama" and "Queen of Memphis" went to the top of the charts. Three more huge hits followed, "Trashy Women", "When You Leave That Way You Can Never Go Back", and "She Never Cried". "Trashy" would lead to a Grammy nomination and become their signature song. That album with six hits and nearly three million sales brought Confederate the Academy of Country Music's Best New Group Award in 1993 as well as numerous nominations from the Country Music Association and the British Country Music Foundation.

The second album, "Notorious", produced one of the group's most popular songs "Daddy Never Was the Cadillac Kind" which became a No. One video as well. "Elvis and Andy" and "Summer in Dixie" would further establish the Railroad as one of the most versatile acts in the business. This album would sell more than one million. Their overal totals are 18 charted hits and five million albums sold.

From rowdy country to raw emotion, a Confederate Railroad concert today covers a wide range of feelings. Young people will be there rocking to "Trashy Women", while their parents and even grandparents will likely be singing along to "Jesus and Mama". The band plays 100 or so dates each year. Whatever the venue, they are right at home…be it a fair, a club, or a biker show. Shirley, the lead singer and vocalist, and his mates, Mark Dufresne on drums, Mo Thaxton on bass and vocals, Rusty Hendrix on lead guitar and Joey Recker on keyboards and vocals are obviously having fun right along with their appreciative audience. At the end of each show, the band stays around until every fan who wants an autograph, or to pose with the group for a picture or just say "hello" is taken care of. 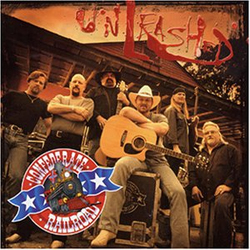 STILL ONE OUTLAW LEFT--I really wanted to do something with David Allan Coe. We even talked about writing one together, but our schedules just didn't work. We could both really relate to that, not necessarily because of the content of our music so much as just the willingness to go against the grain. If there's any outlaw left, it's still David.

THAT'S WHAT BROTHERS DO--I was visiting a writers' night in Nashville and heard this performed. My youngest kids are four and two, close to what this song is talking about, and it really hit me because of them, the way my four-year-old will teach the two-year-old all the stuff he knows. In fact, I told my wife Jenni about it when I got home. Then, both guys who were helping me look for songs, Al Cooley and John Dotson, brought it to a song meeting at my house. I knew that had to be a sign.

BODY LIKE A TEMPLE--When we were pulling this album together, I thought this would make a great duet if I could get George Jones to agree to do it. A lot of us can relate to this song, but I knew for sure he could.

DIGGIN' IT--I've known Craig Wiseman and Bob DiPiero forever, and I've recorded many of their songs, and I couldn't resist this one by the two of them together. It's just a fun, uptempo, lighthearted song.

WHITE TRASH WITH MONEY--When things first started going well for me, I bought a nice house in a nice part of Chattanooga. The neighbors were all concerned that with an entertainer moving in there'd be parties and Harley-Davidsons and naked women at the pool, not realizing that since I entertain for a living, all I want when I get home is peace and quiet. Eventually, one neighbor told me, "Hey, you're the most laid-back person in the neighborhood." I had to write this song anyway.

WASTED TIME--My ex-wife and son lived in Atlanta, and I went down to one of his football practices one day. It was a two-hour drive each way, and I got there just as a two-hour practice started. Afterwards, I walked him to his mother's car for just a minute, and drove home. Out of six hours, I got to spend about a minute with him. I got to thinking about all the time I'd missed through the years, and that's where the second verse--and the song--came from.

THE "R" WORD--I hate political correctness in every form. I don't like someone telling me what to think. I thought this song tied in very well. It's by Dennis Linde, a guy who has a knack for capturing the offbeat--"Bubba Shot The Jukebox" and "Goodbye Earl" are both his, and I think he's done it again here.

BORROWED TIME--I've calmed down a lot in the last ten years, but this kind of took me back to those days where you knew deep down it was all going to catch up with you someday but you didn't really care yet.

RAINBOWS AND RAIN--That song was pitched to me three or four years ago, when we were doing the "Keep On Rocking" album, but we didn't have room for another ballad and I had to pass. Then, I thought about it again for this one. It had stuck with me all that time. It's about as close as I come to a love song.

THICK AS THIEVES--I liked that one because it made me think of my relationship with the band and crew. We'll have differences between us, but we'd all back each other up if somebody picked on one of us.

Mo Thaxton (Mo was born in Georgia on July 8th and currently lives in Alabama. Between 1994 and 2006 he was a member of Dr Hook With Ray Sawyer and he joined Confederate Railroad in October of 2014. Mo learned to sing parts in church before going to school and he played bass guitar in the high school jazz band. He heard his first Deep Purple song at the age of 13 and decided then he wanted to play music for a living. Mo started in local garage bands like most musicians at age 16 but didn't play in clubs until his mid 20's. Mo is enjoying life these days out on the road performing in front of sold out shows with Confederate Railroad having fun every night and loving what he does.)

Joey Recker was born in Baltimore but was raised in Plains, GA. At 9 years old he would sneak into the unlocked church a few miles from his home to play Gospel songs and Billy Joel on the piano. He performed in high school and college show choirs and jazz bands until he joined the military in 1985. Joey retired almost 30 years later at the rank of Command Sergeant Major. He was "discovered" in a South Georgia bar playing and singing for local music lovers and has been on the road with Confederate Railroad since January 2017. 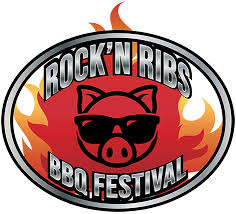